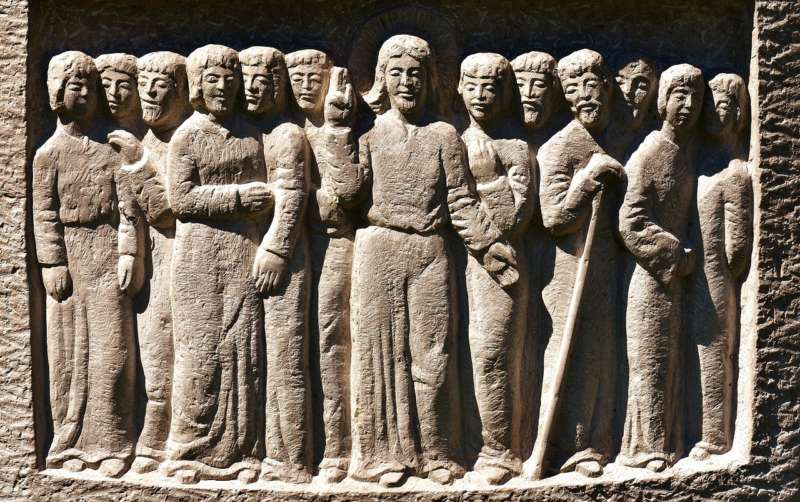 The Twelve, also known as the Twelve Disciples and the Twelve Apostles, were the primary disciples of Jesus.

After Jesus’ death and resurrection, they continued to preach the Gospel and perform miracles (except Judas Iscariot, who after his betrayal and death, was replaced by Matthias). The Twelve are listed in Matthew, Mark, Luke and Acts. They are referenced by John, but not all named individually. When they are listed, Peter, Philip, James the Less and Judas Iscariot always appear in the same place. This may indicate that Peter, Philip and James the Less headed up a group of four each.

The disciples often conducted business in pairs (Luke 10:1). Peter and John were often seen together, as were Philip and Andrew (despite them being in different groups of four).

There were also family relationships within the Twelve as well. James and John are called the ​“sons of Zebedee). They also happen to be the sons of Salome, Mary’s sister, which makes them cousins of Jesus himself.

James the Less and Matthew both have fathers named Alphaeus. It’s not certain, but that could make them brothers.

As can be seen in the list above, some disciples have more than one name. Like many cultures, people often took on names that said something about their character, or referenced where they came from.

Simon (which sometimes had the uncomplimentary meaning of ​“reed”) was renamed ​“Peter”, which means ​“rock”. Jesus used this name to reference how he was going to establish his Church.

Bartholomew was also called Nathanael. Bartholomew simply meant ​“son of the furrows”, or son of a farmer (Bar Talmai). Nathanael, on the other hand means ​“God has given”.

Thomas was sometimes referred to as Thomas Didymus, which means ​“twin”. This could be a reference to the idea that Thomas had two very different sides to his character: he could be extremely cynical, but also incredibly loyal.

Judas (not Iscariot) had two other names: Thaddeus and Lebbaeus. Both these names mean ​“heart”, or ​“courage”.

People in those days didn’t really have surnames like we would. Judas Iscariot means Judas who is from Kerioth. Similar to Leonardo da Vinci is Leonardo who is from Vinci.

The disciples were ordinary men. From wildly different backgrounds – politically, vocationally and theologically. As such they were united in their following of Jesus, but very different in personality, character and temperament. They were flawed men and their own worst enemies. Let’s look briefly at each of their characters:

A mixture of spiritual goals and ambition. He was impetuous. He acted and spoke without thinking. But, he was a risk taker; outspoken, opinionated and sensitive to public opinion. He wanted to be everyone’s friend.

In contrast to Peter’s brashness, Andrew was quieter, loyal and great communicator with individuals. A master of one-to-ones.

Marred by misguided zeal. He had an explosive anger. James was the first to be martyred, so he clearly made an impression on those who opposed them.

Though he was brave, he was also a bigot. He kept his own place and made sure others kept theirs. He would quickly take sides.

A deliberate thinker. Precise and logical, he’d prefer to see before he believed.

Morally excellent and devotional, yet skeptical and hesitant Honest, and guileless.

Some would call him doubting. Unfair, maybe? He was subject to gloominess and despondency and had faith for all things negative.

A despised tax collector, a social outcast. He was anti-nationalist, dishonest, had no trust or reality, but made the most of the circumstances and served himself. As a result he became wealthy at the expense of the people from whom he collected taxes and became accustomed to a high social life. But he had a keen and systematic mind.

Very little was known about this James. ​“Less” could have meant that he was short, or young. We do know that his mother was one of the women that followed Jesus. Maybe she encouraged him to join the group.

The one with three names. We was a man known for his heartiness and thankfulness. But, he was confused at Last Supper, still held to a carnal expectation of the kingdom, unable to hear what Jesus was teaching.

He had a political agenda. Zealots were dedicated to insurrection and used the dagger and stealth. They were political malcontents, freedom fighters, fanatics, passionate patriots. It’s intriguing to see two polar opposites (Simon the Zealot and Matthew the tax collector) united in the same cause.

The only disciple from Judea, (the rest were from Galilee). The most flawed character and ultimately doomed to his covetousness.